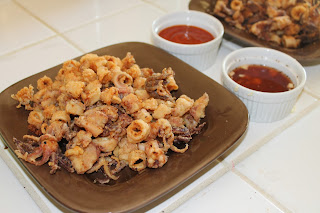 Jack and I love fried calamari and on the rare occasion we have a date night just the two of us, if the restaurant has fried calamari, we always have to try it and we compare to other fried calamari we've eaten in the past.

This was my first attempt at making this and I didn't have a recipe to go off of, I just kind of went with what I knew about frying. I decided to fry the calamari in a deep skillet which it turned out great, however I think it would've been better if I had used my deep fryer.

For those of you who have ever cleaned the calamari when it's fresh, you know it's not a quick and easy process. I cleaned nearly 3 lbs of calamari in approximately 45 minutes and that's including trimming it to fry as well. I'd say this is pretty good timing for my first try.

After you have cut and trimmed the calamari, it should look like this: 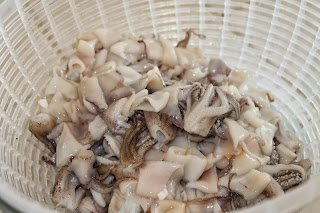 As for frying the calamari, for a deep skillet, you'll need enough oil to fill the pan 1/2 way up. For deep frying, you'll need enough oil to fill to the maximum oil limit. Oil amount varies depending on the type of equipment you're using. I probably used about 8 cups of cooking oil in my deep skillet.
For the First Variation on Batter:﻿
Combine:
2 cups all-purpose flour
2 tbs. cayenne pepper
1 tbs. salt
1 tbs. pepper
Dredge calamari in flour mixture and fry approximately 1-2 minutes until golden brown. 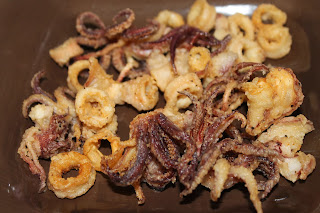 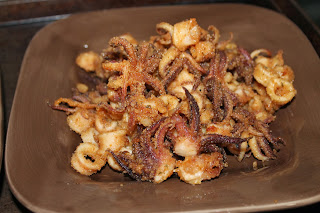 For the dipping sauces, I of course wanted variations on this as well.
The first dipping sauce I prepared was marinara. I didn't have the ingredients to make a homemade marinara on hand, but I had a jarred marinara, so I ﻿warmed about 1 cup of marinara sauce and combined with 2 tbs. red pepper flakes to spice it up a bit.
The second dipping sauce I prepared was a red wine vinegar sauce. I minced 1 cloves of garlic and combined with 1/4 cup red wine vinegar and a dash of salt and pepper.
Both dipping sauces were great. I actually prefer the vinegar sauce over the marinara. 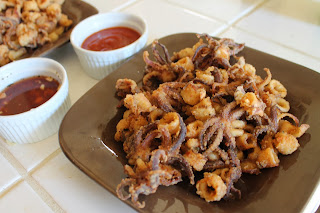