October 01, 2013
For those of you who have kids, you know that sometimes they can be the pickiest eaters. There's no telling what they will eat one day and won't eat the next.

My oldest, Nicholas refuses to eat veggies except for peas and corn. I've tried just about every vegetable there is with no luck. Only peas and corn. I started researching some smoothies on Pinterest and I found a ton that had veggies in it. The green leafy veggies that are so good for us, so I decided to try these out on Nicholas. Keeping my fingers crossed he would try them and like them. The first smoothie was a success and so I decided to get more creative. Every smoothie I threw at him he would drink with excitement. Probably because a smoothie tastes more like a treat to kids.

Since Nicholas liked them, I decided to make smoothies for Jack and I too and Jack was pleased and willing to try all of my smoothie concoctions, that is except for the one with beets in it. At first I was hesitant about doing veggies smoothies cause I was worried about the taste and if I would actually like them. I loved all of them, but then of course I love veggies, so all of them were delicious to me.

Since I knew I was going to be making a lot of smoothies this week based on my grocery shopping trip yesterday, I decided to pre-bag for the week. 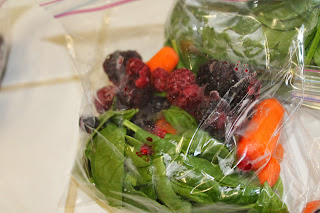 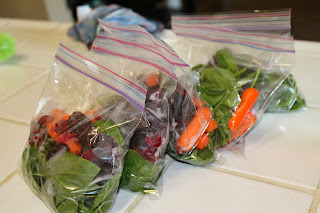 Now I was set for the week and all I had to do was take out a bag and blend with water or milk.
I am all about making things easier for myself as a stay-at-home mom because there is no telling when our next free moment will be and for how long it will be. I use a magic bullet to blend the smoothies for about 1 minutes and just serve. They're delicious. The only thing I didn't put into the bag that I froze were the apples because I didn't want them to turn brown.
Ingredients:
1 cup spinach
5 baby carrots
1/2 cup berries
1 cup water or milk (I like using coconut or almond milk)
Directions:
Put all ingredients in blender (I used my magic bullet) and blend on high 1 minutes. Makes 1 Smoothie. 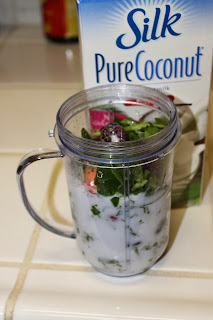 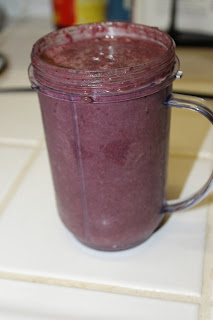 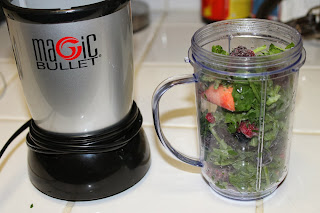 This dish right here is truly one of my specialties. I love making this dish. If it’s for Jacks Birthday, Valentine’s Day, or just because we want something fancy. Usually I just do the Filet with shrimp or lobster and topped with holandaise and asparagus, but this Valentine’s Day I decided to elevate my recipe a little more and try something new and this is what I came up with. I hope you all enjoy and if you have someone special, try it!
Steak Oscar for Two
Ingredients:
For the Steak: 2 Filet Mignon Steaks 1 tbs.Himalayan Salt 3 tbs. fresh cracked black pepper 2 tbs. avocado oil
For the Hollandaise: 2 egg yolks 1 stick butter Juice of 1 lemon Salt and pepper to taste Dash of fresh tarragon minced
For the Crab Cakes: 1 Dungeness crabshelled, and cartilage removed 1 tbs. fresh lemon juice 1 egg 1 tsp. himilayan salt 1 ½ tsp. cracked black pepper 1 tbs. fresh parsley, finely minced ½ cup fresh grated parmesan cheese ½ tsp. Old Bay Seasoning 1 tsp. avocado oil
For the Shrimp: 4 Extra Large Shrimp, peeled, deve…
Read more

Motherhood. Where do I even begin. It is both beautiful, challenging and somehow completes every part of me. When I was a young child, I remember always picturing myself as a mommy when I grew up and I knew that I would be a great mommy and I wanted to be a best friend to my kids like my mom was to me. I never knew the challenges that came along with Motherhood. I never knew how much you would worry about these precious gifts from God that you brought into this world.
A dear friend of mine is a new mommy to her second child and I have been chatting with her about her challenges she's been having and that has prompted me to write this post, because I'm hoping that, like some moms out there, I want you to know, that, yes, we go through this... so I want to share with you my story. I guess I should start with my birth stories.... Cause those are always fun... LOL
With our first child, Nicholas, our birth plan, as with most, we wanted to of course go the natural way with Natural …
Read more

After years of cooking and sharing recipes, I have finally put together my blog site.

Its been a long journey in cooking for friends and family. It wasn't until recently that I was given the confidence to actually create a blog and share everything I have learned and am still learning in the kitchen.

I recently was given the opportunity to air on live tv with Good Day Sacramento.  It was quite the experience. Friends and family told me I was a natural on tv, but what they didn't see on tv was how extremely nervous me. My mom and my husband were there calming me down.  After each take, I would let out a big "Whew" and ask how I did.  Apparently my nervousness did not show when the camera was rolling. Thank Goodness!

I would like to share the recipe of my dish on Good Day Sacramento with all of you.

Spaghetti Squash is that ingredient that we all seem to forget about. It's amazing and very good for you to eat. I think when people look at a spaghetti squash, they l…
Read more