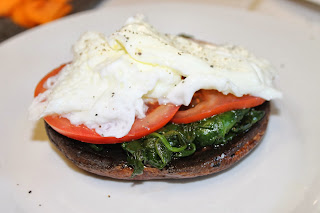 This morning I was on a mission to prepare a healthier version of Jack's favorite, Eggs Benedict.  To say this morning's breakfast was an epic fail would be an understatement.

As I stood in kitchen whisking the eggs with lemon juice and water, I awaited for the yolk mixture to become frothy and double in size. After about 10 minutes, this happened. I removed from heat and started to whisk in the butter. I whisked for another 10 minutes waiting for this sauce to thicken and after 10 minutes of additional whisking, it was still thin. The taste was there, but the thickened sauce was not.

I was very disappointed, but I decided to just make these breakfast meals like open-faced sandwiches, rather than Benedict.  I guess I have learned my lesson with hollandaise.... Never try a recipe other than Julia Child's! Her Hollandaise sauce is perfect and comes out amazing every time.


2 Portobello mushrooms
4 bacon slices (I omitted the bacon on mine when assembling)
pinch of salt
4 cups fresh spinach, chopped
4 eggs
1 large tomato, cut into slices
salt and pepper
cooking spray
If you want something other than mushrooms, toast a slice of bread and omit mushrooms.
In a pan over medium high heat, lightly coat with cooking spray and allow it to get hot but not smoking. Place the mushrooms in the pan. If the pan is two small for all of the mushrooms to fit, cook in two batches. Turn the mushrooms once the bottom has turned dark and has softened, about 4 minutes. Sprinkle with salt and allow to cook on the other side until the entire mushroom is dark, soft and cook all the way through. Remove cooked mushrooms from pan.
Add the bacon slices to pan and cook until cooked through.  Remove bacon and add the spinach cook until soft. Season with Salt and Pepper.
Poach the eggs in lightly salted simmering water.

Place the mushroom on a plate, top with spinach, then tomato slice, then poached egg.

Since Jack doesn't like mushrooms, I put his on a slice of toast. He still wanted the thin hollandaise, so I put a little on his plate and topped with some hot sauce. 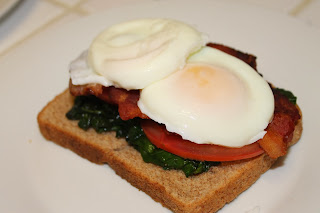 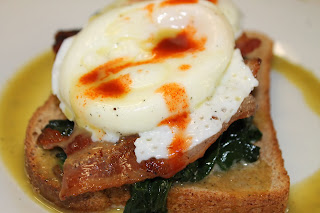 For mine, I omitted the egg yolk when poaching my egg. 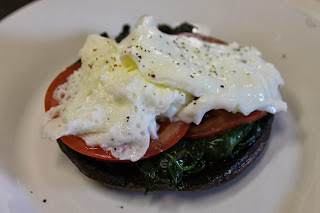