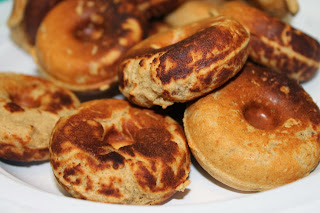 Today the kids and I are going to the pumpkin patch with Mema and Papi, however I wanted to start this morning off with something different than the pancake batch I made and froze on Sunday for the kids breakfast for the week.

I searched paleo recipes on Pinterest and found this one:
Bacon Banana Almond Butter Donuts

Once again, I didn't want to leave the recipe as is, I needed to make it my own and it was a great success. The kids loved these donuts.

I gave them each 2 donuts and a banana and they gobbled them up. I have leftovers for Jack for the next few day and I know he will enjoy them since there's bacon in them. He doesn't have to feel bad about eating them either since they're paleo and healthier than a normal donut.

With an electric mixer, cream the almond butter,  eggs, banana, maple extract, and honey. Slowly add the dry ingredients and beat until fluffy. Fold in the bacon bits. 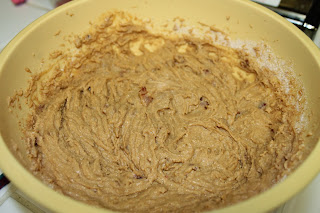 Spoon batter into a greased donut pan (you can definitely use bacon grease in pan if you prefer, but I did not use any grease since I used my donut maker).

For donut pan: Bake at 325 degrees for 15-20 minutes or until a toothpick inserted comes out clean.
For donut maker: Spoon 2 tbs. batter into donut pan and cook according to packaging directions. 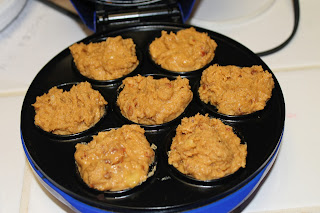 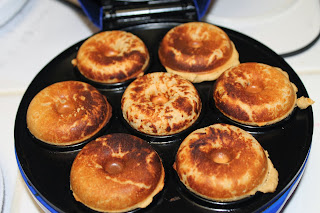