October 16, 2013
This morning I wanted to try something different for my kiddos. I was out of regular bread, however had an entire loaf of raisin bread, so I thought, why not make french toast with this.

Wasn't sure what the kids would think about this, but it was a hit!!!
I actually made myself a slice to try also and I don't know why I haven't tried this sooner! It's brings French toast up a notch! Yum!
Ingredients:
4 slices raisin bread
1 large egg
2 tbs milk
1/4 tsp. almond extract
1/2 tsp. cinnamon
1/8 tsp. nutmeg
Cooking spray
Instructions:
Beat egg with milk, almond extract, cinnamon and nutmeg until well combined.
Heat a large skillet over medium low heat. When skillet has warmed, lightly spray with cooking spray.
Dip each slice of bread into egg mixture to coat on both sides and place in pan. Cook about 2-3 minutes on each side until lightly browned.
Remove from pan and serve warm.
You can serve with butter and syrup, or even just eat it plain! 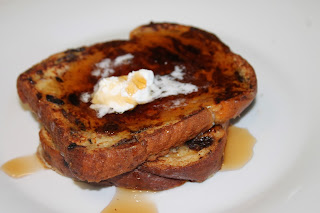 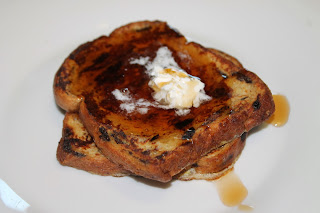